Clutching my next speedboat ticket, I descended the concrete steps to the vessel undulating gently against the pier in the wake of small craft dashing around nearby. Seating space was limited and the boat was crammed. I forced my knees in behind the seat ahead and waited.

Motors roared to life and we pulled away, out into open water. Sometime later, when I peered up over the sill to my right, I saw vegetation flying past my window. Through the left hand row of windows, the greenery whizzed by too. Large tree trunks, multi-stemmed mangroves, bushy growth and low-hanging spindly branches sprouting copious twigs and leaves cloaked the channel banks. We were entering a delta of sorts – and how I love deltas! 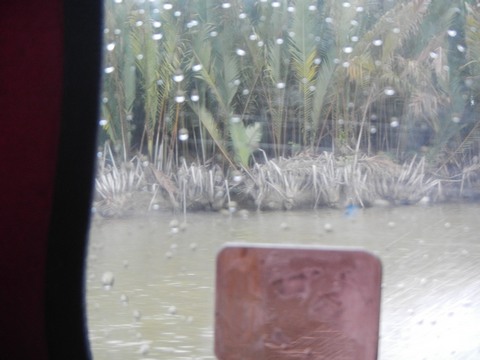 Places such as the Ganges River mouth, the Okavango Delta and Nile Delta abound with life, or – more correctly speaking, used to support abundant life until mankind appointed himself to begin exterminating it systematically. In such places I’ve seen vast numbers of species which still survive despite perpetually being harassed. Without knowing anything about the delta the speedboat was motoring up, I wondered what list of mammal and bird species lurk in its dappled shaded dampness.

The vessel powered its way for at least, I thought, 45 minutes up into the interior, away from the coast, meandering in a complex pattern to round every bend correctly so it’d be in a position to enter the next, and the next, and the next correctly. It was great fun. The bow sprayed green-tinged salty water in a wide fan across the otherwise glass-like channel surfaces as we glided over what seemed like no resistance at all, and we left a wake to lap at the sticky muddy shores at the bases of the entangled mangrove forests.

Smoothed mud mounds had formed islands which supported the prolific tree and shrubbery growth; islands that move over time as roots, tides and currents change things. It was bliss to see. There was no litter, no oil slick, no deforestation and no visible anthropogenic influence. I was in nature, and that’s where my soul feels most alive. I wanted to jump out of my seat and open my arms wide to let in the energy that wilderness emits. One only feels it if you’re attuned to the natural world which, I believe, most people have lost touch with entirely.

But, deciding to behave rather more socially for a change, I remained seated and turned on my video camera and camera instead. Islands swept by just above eye level. Flotsam did too, just beneath eye level. Passing egrets patted the air with their rhythmic wingbeats. Dead and dying wood leaned over the water in a haphazard mess which, when created by nature, is as beautiful as can be. Saplings and thick, long, twisting branches fought for light in the tangles of waterside growth. Randomly rooted palms stood as giants among it all. I was content thinking of nothing but the serenity before me.

As I shot footage, the sense of tranquility I felt grew. The maze of islands and channels in the sweltering humidity was all around, and I felt as alive as a carefree toddler playing nameless games in their favourite sandpit. In every way, things were beautiful for me right then.

The engine powered down; it distracted my mind. The boat slowed. Its bow sank back down and the vessel was once again horizontal. It putted to a handmade wooden jetty on starboard side, a worker steadied it, and the first of many passengers disembarked.

Why not find out for yourself what new adventures and excitement you can experience when entrapped in your own CB-X Male Chastity device.