Nowhere but this way and that

WorldRecordChaseBlog.com > Chasing my desires > Nowhere but this way and that

Pace after pace, I strode down the main road of Tarakan city in the pre-traffic hour rush, with the device bobbing in my pants like a well-behaved pendulum. All premises were closed. Soft sunlight was just beginning to break the blur of interlocking shadows right across my field of vision. I passed a long vehicle queue blocking the artery to wait for the local fuel station to open – something that reminded me of Niger’s and Zimbabwe’s political problems I’d seen.

Just beyond that traffic venturi, I made a stop that no homeowner would have appreciated. But if I were ever to be caught with my pants around my ankles in a shrub- and flower-filled garden, my reply would be that “I’m human and so are you”. Mind you, what were my other options?

A lone elderly man I’d asked for directions had told me – cigarette flicking up and down hyperactively as he spoke – the next city marked on my map, Samarinda, was down this way. I walked faster, not wanting to arrive in the dark. 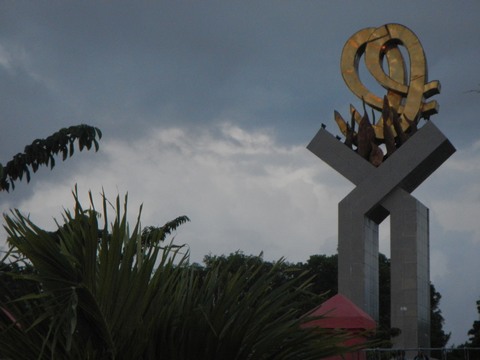 At yet another junction adorned with creatively decorated monuments and towers the meanings of which I was oblivious to, a group of bashful and giggling children told me to turn left for Samarinda. Right, I obeyed, and continued to walk. I was soon offered a lift which rounded a curve in the road and stopped at a bank of windows advertising airline companies.

Was this a toll gate, a police check point, a harbour or a flight training school? I had no idea. The driver indicated me to get out but I tried to explain I was headed for Samarinda, several hours’ drive south. That’s when the confusion began.

I asked someone in the dispersed crowd at a doorway where to go, and got an embarrassed look. It happened again. And again and again. Some proceeded to suck their thumbs, others flicked their eyes wildly, smiling slightly. And still others bowed their heads and tugged at their shirts in silence. I’m not renowned for my patience, I know, so getting such reactions did nothing to endear me to those I was questioning for help.

I spoke up loudly, “Does anyone speak English, anyone talk Ing-k-less! English? Do you, sir, speak any English – Ing-k-less?”

The chattering folks fell silent and stared at me. Obviously that was my answer: nobody would be able to communicate with me. I walked from group to group, asking directly where the road is to Samarinda. The more nobody responded, the more directly I began to ask. I kept asking loudly and one young chap stepped forward. I was so pleased. I was amused by what he told me: I was in a domestic airport that links the city to Samarinda and other urban locations, looking adamantly for a road that does not exist because Tarakan is on an island!

Then I understood, and did I feel like a clown in front of all these people. So, humbly, I slung my backpack on to my back again, thanked the informative bloke and began to backtrack all the way into the city, to the ferry terminal. Oh Alastair… the stupid things you do sometimes!