Kids – they’re kids, no matter in what country

WorldRecordChaseBlog.com > Record-breaking on the road > Kids – they’re kids, no matter in what country

Politics has ruined the planet when it comes to national identities, civic pride and racism. We see social segregation nearly everywhere, from urban planners’ charts to international travel regulations and the bias published in historical accounts. But you know what?

All this is done by adults; children the world over, it seems to me, are unable to hate like that. And when I perform in schools doing my motivational storytelling, I see the exact same reactions on the faces of little ones irrespective of their location on the earth, their race, beliefs, class or other social divides. They’re children and their minds are supple. I understand that. 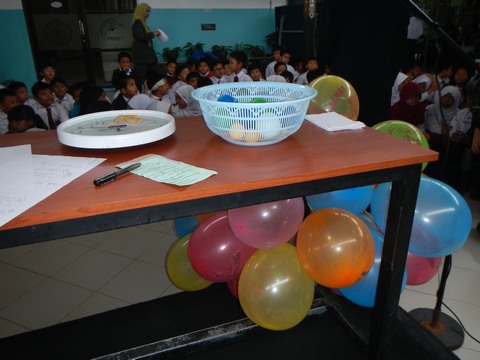 So I hope what I say in schools gets into the children’s minds, because I want to help them. In this world of so much negativity, I’d like to at least bring a short period of positivity and sparkle to the imaginations of little kids. I tell them some world record stories, I make jokes about my failures (otherwise known as banana skins), I put on different voices and pull strange faces, and I try – repeatedly – to get them to accept that each of them can achieve big things.

If there’s only one message I hope any child ever takes away from my storytelling appearances, it’s this: they should be their best. And I like to instill an additional message, that the best of the best dedicate their lives to healing the damage which mankind has caused to this innocent earth. As I spoke to the enthusiastic little ones during my latest storytelling act in Balikpapan, these were the very messages I strove to implant in their minds, with full support from the senior staff. Now that’s what I like!

I was also humoured to see the school had had a banner printed and posted as a backdrop to the stage I was placed on, showing some of my world record achievements. I don’t mind that sort of attention and praise. But it should never detract from the more important aspect of my storytelling appearances which is to deliver positive messages of achievement for children – no matter what their background, race or location on the earth.