The best lift of my journey so far – part 1

WorldRecordChaseBlog.com > Chasing my desires > The best lift of my journey so far – part 1

I love nature. So when the next 4×4 stopped to offer me a lift, I couldn’t believe my luck. The driver, Jeronny Boitol of AdvanceTech in Sabah, Malaysia, spoke very good English and explained that he could help get me closer to Tawau, but he had to take a detour first. And that detour was the highlight of my hitchhike through Sabah. Let me tell you all about it.

Having flicked off several drivers who only stopped because they wanted to extract money from me, Jeronny leaned over and unlocked his passenger door. He was on his way to fix electronics at a radio tower on the far edge of Tabin Wildlife Reserve. When he asked if I’d mind he detour my heart skipped a few beats from excitement. I was finally about to go into the jungle – awesome!

Before long, the 4×4 was bouncing along a rutted, potholed and corrugated road 25km into the hinterland. Most of it was deforested and planted with oil palms. These plantations are beautiful to view: fern fronds spill plentifully from their trunks, dappled light scatters across the matted earth between them and they’re cool to walk in during the heat of the day here. But these hectares upon hectares of greenery are also almost sterile as far as biodiversity goes. Not much lives in these artificial forests. Borneo’s ecosystems – it seems to me – are in peril at the hand of profiteering because palm oil, I am told, is “very good money”. 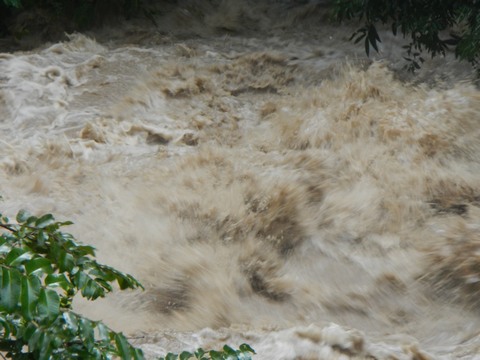 But thank goodness the plantations on one side of the gravel eventually ended and the road broke out into indigenous forest: richly coloured by shades of densely growing vegetation. A “welcome” archway over the access road bore carvings of a bear, an elephant, a wild pig and other native wildlife. Finally I felt as if I was really in Borneo. To the left was an electric fence to prevent Asian elephants from crossing into the rows of oil palms. Several species of eagle swooped in front of the windscreen as we drove. A family of wild pigs scurried into the damp undergrowth ahead of us. A large monkey, which I am yet to identify, loped into a thicket and then spun around on its buttocks to stare at us as we passed. My eyes were wide open, searching for more wildlife.

We reached a cellphone tower and the 4×4 parked at its base. As the engineers began to do whatever cellphone tower engineers do, I walked off into the jungle wildlife reserve. Soaring tree trunks supported voluminous leafy canopies which towered over vast tangles of vines creeping over randomly standing dead wood and the shrubbery. Green colours in dozens of shades filled my vision, as if I were walking carefully across the floor in a massive, expertly decorated green auditorium. I was alone in nature at last. I couldn’t help thinking how soothing such places are for the human soul, compared to urban areas which – by contrast – operate at a frequency that prevents our souls from being completely at rest.

I ventured deeper into the forest, little by little, photographing the many visual delights: brightly coloured fungi, a broiling river washing away a discarded concrete pillar, and a veritable light show of sunrays striking the growth through gaps high up in the canopy layer. I didn’t want to leave, but my world record attempt journey remained my priority.