My anti-smoking stance will never change, not even in a nation where nearly every male over the age of 16 is a chain smoker. Adverts all over Indonesia promote the habit. I have to give credit where it’s due though: the adverts work well – I can literally open my eyes at almost any time, in any direction and I’ll see a smoker enjoying their addiction which is slowly killing them.

I walked out of the town where the speedboat had left me and began to hitchhike. Two kids on a bicycle befriended me and I gave them some snacks. Upon receiving them, the brats stuck out their hands and demanded US dollars. Not being able to speak their language, I picked up a rock and they knew I wasn’t happy. They dodged around me on their bike for a long time and weaved across the lanes of traffic going in both directions, but after a truck, a police 4×4 and a car all nearly hit them off that bike, they chose to peddle off.

A very friendly man stopped next. I’d hardly introduced myself and I was told a bus ticket was being arranged for me, free. I was getting used to this incredible generosity by now; it seems the people of Borneo believe every hitchhiker is in serious trouble and needs dedicated help. Of course that’s not true, but the generosity never ceased to come my way. 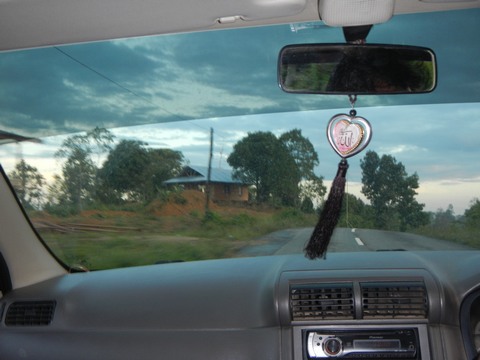 I was put into a car by that lovely man and the worst journey of my trip began. No matter how I and four other passengers asked the driver to stop smoking, he fobbed us all off and smoked to his heart’s content all the way to Samarinda, 18.5 hours’ drive south. He sped. He drove recklessly and frequently crossed the centre line on wet tarred roads through the jungle, including on blind corners. He nearly hit an oncoming car because he was lighting a cigarette. When we stopped for short breaks, he ate oily snack food and smoked even more. He never stretched or did any basic exercises. And when my anti-smoking lamenting got stronger, he said he’d fall asleep unless he smoked constantly as he drove.

Perhaps my education is flawed, but I thought driver alertness is assisted by taking regular breaks, eating well and doing exercises at each stopover. No, not according to this driver: the solution’s to smoke more and more, no matter how many of your paying customers complain. The entire journey was in a speeding smoke-filled tin can, in the reckless control of an egotistical man who only thought of himself all the time. When anyone moaned about the suffocating smoke, he smiled and joked about how beneficial the habit was for him. He was horrible – and that was the view of almost all his passengers.

When I was finally able to escape the “smokemobile” at the gate to the Samarinda Police Station, where I asked to be dropped, it couldn’t have been a moment too soon. If I lived in the region, I’d never use that company again, the name of which I don’t know.