The next leg of my 100th world record attempt as I journey around Borneo whilst remaining virtuous and chaste is certainly taking its toll on my body. I am now suffering with several tiredness and fatigue symptoms, as I struggle to cope with public transport, the humidity, illness and poor diet.

For reasons I cannot understand, public transport in Kalimantan operates overnight, everywhere. Inter-city busses and people movers leave in the late afternoon and drive through the night – often at breakneck speed and enveloped in a cloak of brutally loud music – until ending their journey at between 1am and 4am. People here wake up early too. Put these two together and you have a chaste young man suffering with lots of tiredness and fatigue symptoms! 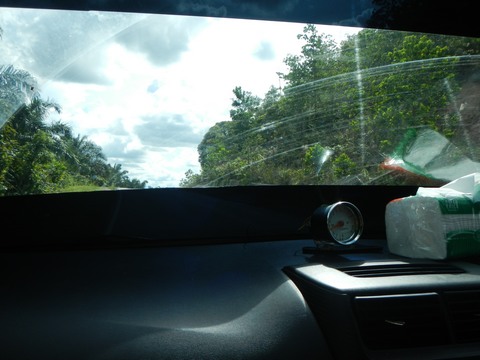 Add to this the need to be constantly vigilant, changing transport modes, engaging in petty talk with inquisitive locals and hunger pangs most of the time, and I’m shattered after the first week. Well, those are the bores. Excitement comes in the forms of my vehicle nearly side-swiping motorcycles which are skirting potholes, watching my driver overtaking on blind corners with 2 wheels partially over the jagged tarmac edge, and seeing locals hacking vegetation into timber as we scream by in public transporters filled with cigarette smoke with “No smoking” signs on their dashboards.

My head’s been spinning for days. Very late nights, a poor oily diet, constant thirst, a twinge of diarrhea now and then, a brain mashed to death by thumping musical beats, and a body flexed painfully from my crown repeatedly hitting the vehicle ceiling and my bum landing on a different part of the seat each time my driver ignores the large ditches in his path all have left me feeling rather worn out.

But this is when I need to be mentally strong for my sacred apparatus needs me to care for it. No matter how fatigued I get, the flesh inside the chastity device needs my attention on a regular basis. If I forget, a spike of pain shooting across my groin soon reminds me it’s time to clean myself again.

If you want to get a real feel for what is involved in this arduous 100th record attempt, why not get your own CB-X Male Chastity device and see how restrained you can be with this device protecting your precious assets.