How I love the police

WorldRecordChaseBlog.com > Chasing my desires > How I love the police

OK so I love the band the Police, but this was going to be yet another test of my nerves on this 100th world record attempt, meeting the Indonesian police force – with all the rumours around brutality and bad treatment by them, I was in some trepidation over what may happen.

After another bouncy, high-speed journey in another people mover, crossing deforested patches, passing through lean-to villages and dodging a wide variety of both living and non-living “traffic”, we entered Singkawang. Again, it was night. I had nowhere to stay so I asked for directions to the police station. That’s when the interrogations began. 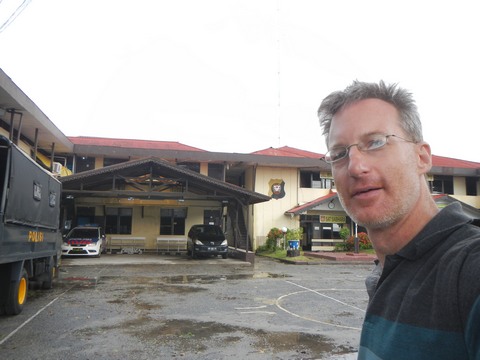 I was made to stand at attention, show my passport which was passed from officer to officer, was questioned about the usual things, and had a total of 14 photos taken of me as identifying evidence by 6 police officers. My passport was photographed on mobile phones, I was asked about my intentions and what was in my bag, why I wasn’t staying in hotels where other white men stayed overnight, and why I had come to Indonesia. The questions seemed to go on for a good hour.

To lighten the mood (and because periodically I’d twitched and grimaced in pain as the fishing line constricted around some flesh), I decided to share news of my world record attempt. Was that a mistake! He questioning intensified, and now I had all 11 police officers in the room frowning, staring nowhere else than at my privates. I felt a wee bit intimidated, to be honest.

A quiet officer, I was sure was the senior private investigator, held his mobile to my face and snapped a shot with the flash on. He was holding a file that had been opened on me, bearing photocopies of my identity and with hand-written notes being added every few minutes. I was tired, still dizzy, hungry and I really wanted to lie down. I shuffled on my feet, hoping the hint would be noticed, but it wasn’t.

A stream of policemen came to see me, and finally one said I was to follow him to my sleeping place. At last! I was ushered to the on-site mosque and told to sleep on the mat on the floor. I knew this was a privilege, since I am not Muslim. I felt honoured. In fact, I was surprised I was allowed to set foot into the mosque, but found it amusing when a toad came hopping along the inside wall while 3 officers watched me brush my teeth. I bet that amphibian wasn’t Muslim either.

I was told what to do, when and how. I obeyed since I’d heard vicious stories about the Indonesian Police. I was watched carefully every minute. It made me fear I had walked myself into a den of bribery and horror. Nevertheless, I drifted off to sleep on the thin mat after another 30-minute series of questions I had to answer very carefully to avoid trapping myself with words somehow.

I was woken early, still tired, and told the police chief was waiting for me and his support staff had left meetings of their own to witness the meeting. A bolt of fear began to swell in my stomach and I wanted to call for help. But nobody would hear. I tried not to show my worry and walked gingerly in between my 2 police escorts; one was armed. If ever I’d feared the Indonesian Police, it was now: I’d slept there and now they could use that favour as a leverage advantage from me. I clutched my mobile phone, my only means of contact with the Indonesian Police headquarters in Jakarta, where I had an emergency contact arranged.