Drunkards in the jungle

WorldRecordChaseBlog.com > Chasing my desires > Drunkards in the jungle

Because my laptop is a sensitive device, I’ve got to carry it very carefully. This means keeping it on or next to my lap whenever I travel. During my next journey segment it was no different. The vehicle was small and I had to cramp up to fit my legs, my urination bucket and the backpack all together as comfortably as I could. The driver wasn’t interested though; he was concerned with speed.

Spitting gravel out from behind us, the car pulled off in a hurry and it appeared to me the driver knew nothing but top speed. A blur of shades of green whizzed by my window as the vehicle pressed west. Oil palms, rubber trees and clumps of indigenous forest lined the road without end. Breaking up the scenery were shacks, lean-to constructions and sheds all made of tropical woods and corrugated iron. At first glance, the slum-like sprawl could have been anywhere – Mozambique came to mind often, but as I peered closely at the buildings it became clear we were definitely in jungle. 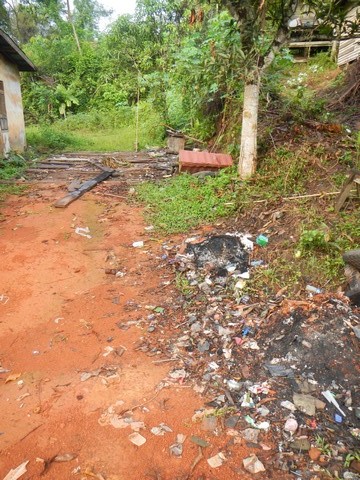 Dried freshwater fish, probably of the catfish family, lay in boxes outside local restaurants and Indonesian-branded litter lay almost everywhere. Plastic, metals and processed rubber items pocked the near-road edge, and in some cases, large dumps of smouldering plastic waste produced pungent smells that’d fill the vehicle momentarily as we drove through the drifting chemical plumes. Date palms and a wide variety of other foliage obscured my view often, providing me with a matrix-like view of mankind’s messy development juxtaposed over nature’s imperfect yet attractive growth. To add to this, the driver (and passengers) seemed unperturbed by the ear-splitting volume of the music, which I felt was not much more than an excuse to pump as many synthesized drum beats into sings as possible. My dull headache wouldn’t leave me.

I’d been told it would be a 15-hour journey to Pontianak. But what I wasn’t expecting was to stop – with no warning – at a ramshackle house along an oxbow bend on a very muddy and exceedingly lush river, and wait for the driver to return, which he didn’t do. Night had fallen and I was waiting. 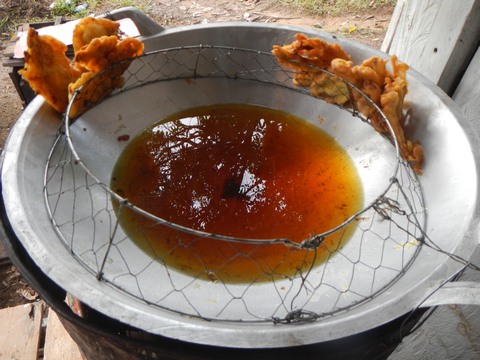 Inquisitive, I went looking, to find all the others from the vehicle relaxing around a 44-gallon lead-based paint drum in which was a gas flame heating fried foods. I didn’t want any of the crispy foods, since it’s well known that cooking in non-scrubbed leaded paint barrels is dangerous.

Apparently, I was told, a major ferry crossing lay ahead and we’d arrived after the day’s final departure. We’d sleep right there. I spun around and saw only a derelict building across from the river, a large area of waste stinking in the night air humidity, a Muslim prayer room in a buckled and lopsided shack, and a gaggle of locals beckoning at me to join them.

For the first time since I’d arrived in Borneo, I was looking at a local holding not one but two large bottles of alcohol in the air. He was having a great – if not unsteady – time, I could tell. Perhaps, from where I stood in the mud at the steps on which the barrel held the gas flame, I seemed a likely drinking comrade. Unfortunately for him and the others slumped over more whisky bottles on the rickety benches, I was more interested in admiring the patterned moths and fleet-footed geckos so numerous on the walls and ceilings under the eco-saver light bulbs. With all these drinking going on, I was worried that they would soon have enough bottle caps to have a go at beating my record breaking bottle cap sculpture!

Very quickly the drunks left me alone – possibly due to their alcohol-induced blurring minds, and I was able to wriggle into a somewhat comfortable position on the vehicle’s back seat to sleep. Not trusting anyone, I set booby traps around me, to wake me if an uninvited hand decided to uplift any of my possessions. I drifted to sleep with my clammy skin sticking to the car seat and the nearby drunks slurring incomprehensible melodious tones deep into the small hours as invertebrates twitched and trilled without end from the cover of the leafy surrounds. This, I reminded myself, was my arrival on the Bornean equator.