This 100th world record attempt of mine is proving to be a very testing time, physically as well as mentally – not only is being chaste for a long period, not easy on your mind, but the arduous journey is taking its toll on me.

I’d not been in this city of Palankarayala (or a name equally as tongue-twisting) for long and I went across a main street to photograph a large cathedral for my “Most well-travelled plastic bag” world record attempt. With no warning, a bolt of sick feeling struck me. I immediately felt dizzy, my elbows began aching and pulsating, and the backs of my eyeballs began to throb. I felt weak and fell over my backpack. My hands were trembling, and I couldn’t breathe deeply because each time I tried to, my kidneys felt as if skewers were being driven through them. A strong headache set in quickly, my mouth went very dry very fast, and I was overcome by fever. What on earth was happening to me?

I stumbled across the heavily trafficked road and lay down in a bus ticketing office. As the ceiling spun (and I don’t feel much better as I write this either), a man approached me saying he was taking me home. I couldn’t have cared less. I moped after him, he put me on the back of his motorcycle like a sack of potatoes slumped upright, and drove for what seemed like a trans-continental distance. 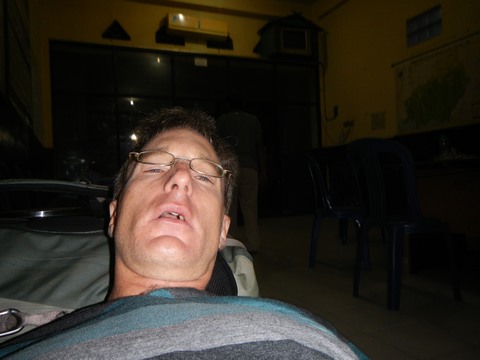 Denny stopped at a simple home with Catholic artworks on the walls. His mother welcomed me and I flopped onto a bed which I didn’t get off at all except to urinate and eat instant noodles for breakfast. A doctor assessed me as possibly having contracted dengue fever, a disease transmitted by mosquitoes – thanks! Just what I need now. I felt sick; really sick. The flesh inside the device was starting to rub itself raw in this near-equatorial humidity and each time I moved, I’d feel a sting. I guess that’s sweat on raw, sensitive skin. I pulled down my pants on the bed, even though the door was open and I couldn’t care who saw me. I tried to manoeuvre the device the little I could, given the fishing line attachments. Thankfully I was able to make things a smattering more comfortable, but the raw flesh was rather excruciating to fiddle with until I let go of the device.