After an oily breakfast served by the friendly shop owners who were entertained by the story I told them of the lock on my pelvis, the people mover again sped off. This time, we slowed to a crawl and turned suddenly into a muddy parking lot an hour ahead. We’d reached the ferry point over a large river exiting Borneo’s interior. 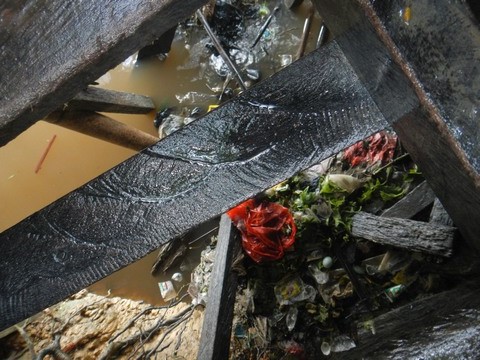 While waiting for the ferry to dock, I sat in the closest restaurant. I saw a rat of no shorter than 40cm scurry across a pile of food scraps that was accumulating under a cut-out section of restaurant kitchen floorboards. It was the food scrap dump, and I stood watching for the rat to return. Instead, half a dozen smaller ones did. The staff thought it a great joke that I wanted to watch the rodents when I could be ordering a hearty (according them them) meal. Oh if only I’d had a cork to spit at them – I am sure I could have hit the target!

I was told to jump aboard the ferry but leave my backpack in the car, which I did. But because we’d switched vehicles overnight, I’d gotten confused about which I was in. As the ferry pulled free from the ramp, I looked around but couldn’t see my companions or their vehicle. Panicking, I searched the vessel, only to be calmed down by others who pointed me to the car I was a passenger in. Lucky me! For a minute I thought I’d been conned out of my belongings.

With vehicles parked on both vehicle ramps, the ferry crossed the river as passengers huddled on the leading side of the vessel in anticipation of getting off fast. Our car was first to bounce onto the concrete and we were away, but stopped shortly afterwards at a large restaurant where I made a big scene.